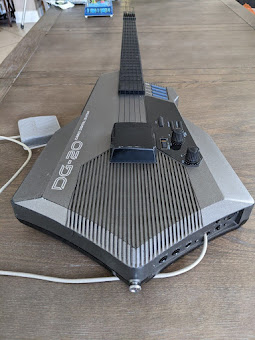 Apologies for the long delay. We had a family health crisis that took up a lot of time the past few months. Everything's going well now and I'll try to update the blog more often. Let's begin!

Bob Weir of the Grateful Dead played a cool Casio synthesizer guitar. That is not this instrument. This is the Casio DG-20. It's a genuine oddity from the early 1990s. Although it is pretty un-cool, they are starting to go up in price and I suspect they will be rather collectible on eBay of the future. Let me tell you about them and my experience with one.

The DG-20 should be considered a guitar-like instrument, not a guitar. It resembles the guitar in form factor, but that's about all. You can play notes and chords on it like a guitar, but not in the same way. That said, it did offer some fun, unique possibilities for a guitarist, especially on a budget.

Where to begin? Let's start with sounds. If you ever walked through a JC Penney or Sears store in the 1990s, you probably saw Casio keyboards on display that you could plink around on. You'd play the demo song and play around with the drum pads. The employees that worked there would cringe every time some kid approached the keyboards. Remember those sounds? Well, that's the sounds of the DG-20. These were PCM-generated tones. Some were usable, others were pretty lame. They weren't anything you'd take on stage with you, but a hobbyist or a kid would enjoy it. 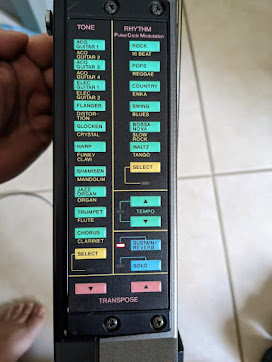 The DG-20 had twenty of those kinds of sounds. They had names like acoustic guitar, flanger, glocken(spiel), shamisen, jazz organ, trumpet, chorus, flute, clarinet, funky clavi, and distortion. It also offered several built in percussion styles including rock (8 beat and 16 beat), country, swing, slow rock, bossa nova, waltz, and tango. I don't know who was ever going to play a tango on this thing, but someone in Japan thought that was a good idea. There was one rhythm named "Enka" which is a apparently a popular Japanese style of music. The rhythms had adjustable tempo controls.

The DG-20 had a few interesting features you wouldn't normally see on a guitar. One was a sustain button, which acted like a sustain pedal on a keyboard. I never tried it, but apparently you could hook up a cable and pedal to use like a keyboard's sustain pedal. It also had a footswitch jack for stopping and starting the beats. Last but not least it had up and down transpose buttons, so you could shift the sound an octave up or down. Well, almost an octave. It would go 11 half-steps, not a full octave. 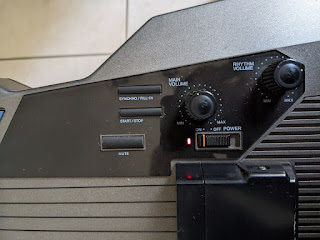 The controls on the top of the guitar were two volumes, one for the voices and the other for the drum sounds. There were four pads which were programmed to sound drum voices like kick, tom, snare, and a cymbal. You presumably could use this to do manual drum fills. There was also a mute switch that you could use to stop everything at once, just in case what you were playing went all to hell. (And that could happen!) Last of all on the top was the on/off control with a red LED to let you know it was on.

Playing the DG-20 only vaguely resembled playing a guitar. The strings were basically black nylon fishing line, all the same gauge. They were not meant to be tuned or to make a sound on their own. They were attached under the covered bridge to triggers that would tell the device to play a sound. This could be a plus and a minus. The upside was that there was no pitch-to-voltage conversion. If you ever played a Roland guitar synth from this period, you'd know that there was a slight delay that was perceptible from the time you picked the string until the note sounded. This was small, but humans have an uncanny sense for rhythm. Studies have show that we perceive inconsistencies in rhythm much more easily than inconsistencies in pitch. With the Roland guitar synths, especially on the lower notes, you had to play slightly ahead of the beat. It was a pain. With the DG-20, that wasn't an issue. The string didn't make a sound, so there was no pitch to convert to a voltage. The string was just a trigger. 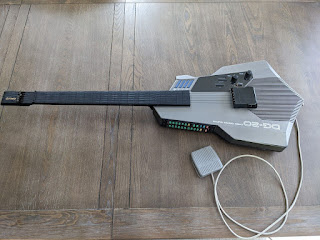 The pitch was determined by putting your fingers on a pressure-sensitive, rubberized fingerboard. The frets were also rubber and integrated into the fingerboard. They really didn't matter at all. They were just a tactile and visual guide. There were pressure-sensitive pads underneath the rubber that detected your finger pressure. That corresponded to a pitch when the string was triggered. It felt weird, like you really weren't connected to the instrument. However, this had some cool applications. On certain voicings, the note would continue until you took your finger off the fretboard. A flute or organ could sound indefinitely. If you wanted to, you could trigger the string, and once triggered, you could "spider" your way on that string up and down the neck, changing pitch from note to note without stopping between them. You could get two hands on the neck and do some interesting things. The downside was that the guitaristic techniques like vibrato and bending don't work at all. If you picked hard and did a rest stroke, making contact the with string below the one you intended to play, it would sound the open string's pitch. You had to pick really cleanly to make the most of this. Hammer-ons, pull-offs, and slurs worked pretty well as long as you picked the first note to trigger the string.

The guitar had a 1/4" headphone jack, a line out, and a tuning control on the lower bout's edge. This is also where the MIDI output was. You could also change settings between a couple of MIDI modes via a switch on this panel. The built in speaker for the guitar was pretty loud--loud enough to annoy anyone in the vicinity. The stock sounds on the guitar mostly sucked and the speaker really didn't help that much. The guitar was powered by six D-cell batteries, which accounted for much of the weight of the guitar. Since it was mostly plastic, you'd expect it to feel really cheesy when you picked it up, but it felt a lot more substantial.

There were two ways to use this instrument and get some really interesting sounds. One way was to hook it up to a real sound module or keyboard with MIDI. I told a guy in a music store about the thing and he wanted me to bring it by. This was in a mall in a small town in West Texas. We hooked the thing up to a couple of Clavinovas or some kind of digital keyboard with good quality sounds. I programmed two strings to be string bass and the other four to be a jazz organ and I kicked off a swing rhythm. As I played through the other instruments, I had an organ trio going. I played some jazzy blues with a walking bass line and comped changes on the organ it it sounded amazing. It actually drew a small crowd from the mall, which pleased the manager greatly.

The other way was to hook it up to an amp with some effects pedals. If you added, some reverb, chorus, and delay, you could do some interesting stuff. Suddenly it didn't sound quite so cheesy anymore. In 1995, I recorded my first album in a proper, professional music studio. I had rehearsed the recording process at home on a four-track Tascam deck so I knew the order I wanted to lay down my tracks. I was trying to be efficient and keep my studio time under twelve hours for financial considerations. The title song, Orion Ascending (linked below), was going to have upwards of nineteen tracks. For some of the background sounds, I wanted an eerie synth pad. I planned to use controlled guitar feedback and the DG-20.

As the recording process went along, the engineer was pretty unenthused. I suppose they see a lot of guitar players and solo musicians come in and try to record their "opus magnus," with underwhelming results most of the time. As I began stacking tracks for Orion, I brought out the DG-20 for it's parts. Kristi, the engineer, looked at me and said, "Seriously? A plastic guitar!" I hooked it up into my pedalboard and into my Marshall. I set the controls for the "clarinet setting," tweaked the chorus and delay to really long settings to make kind of an ambient pad, and we started recording the first section. I faded the notes in with the volume pedal and spidered both hands up and down the neck. We did two more passes, with me stacking the chords to an almost orchestral dimension. On the last track with the DG-20, Kristi's eyes lit up. I layered in two tracks of guitar feedback where I controlled the pitches carefully and then we mixed them together. Suddenly, the engineer was very enthused about the project. That plastic guitar became a pretty cool thing.

As an aside, there's one cool story of that recording section that I have to share, even though it doesn't directly involve the DG-20. During the feedback tracks that got added to the DG-20 tracks, I was in the big studio room and Kristi, the engineer, was in the control room, about 20 feet away behind the glass, monitoring the performance. I was sitting down in front of a cranked Marshall, loud enough to get feedback, and playing with an e-Bow. The e-Bow is a magnetic string driver that can give you infinite sustain. Somehow, while digging into a blasting note on the edge of feedback, I accidentally touched the little, protruding, red LED on the e-Bow against the string at a harmonic node. The single note of the string split into two notes, a harmonic on each side of the node, between the pickups. As I moved the e-Bow, one note went up and the other went down simultaneously. Kristi's head "prairie dogged" up over the console with an amazed look on her face like, "How in the hell did he do that?" It was an amazing moment that you can hear on the recording. It sounded like a note was a shooting star that exploded into fragments.

OK, enough reminiscing. I don't have a Casio DG-20 anymore and I don't particularly miss it. It was weird and cheesy, but a creative musician can do cool things with weird and cheesy. You can find these Casios on eBay, usually in the $300 to $500 price range, which means they are going up in value. It might be something interesting and unusual you could add to your collection. If you want to hear it in action, click the link below, from "Orion Ascending" (1995).