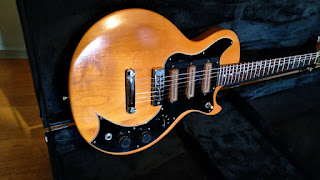 Ahhh, the Seventies. This was the age of big, non-musical conglomerates doing hostile takeovers of major musical manufacturers. They tried to apply large economies-of-scale on guitar and piano building, with often limited success. Often, the case was that quality went down and weird ideas came to the forefront that otherwise would have languished in well-deserved obscurity. Despite this trend, there were some oddball successes, that were good instruments, even if they didn't appeal broadly to many musicians. One of these was the Gibson S-1, known as the Marauder. 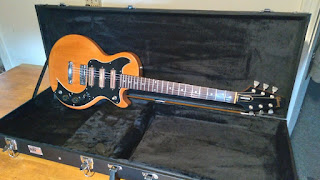 The S-1 was an attempt to broaden Gibson's tone palette and expand its range into that snappy Fender territory at a price point significantly less (for the time) than a Gibson Les Paul. At this time, you could by a Les Paul Standard for right around $495, plus another $95 for the hardshell case. (Nobody used gig bags--such a thing didn't exist. There were chipboard cases for cheapo guitars, but nobody would ever stick a Les Paul in one). Fender Stratocasters sold at the $350 to $375 price point and they included a hardshell case in the price. Gibson needed something more than a single pickup slab of a Melody Maker or Japanese-made Epiphones to attract younger players at that price point. 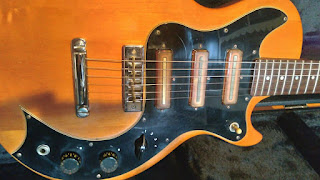 The S-1 had a slab, uncarved Les Paul-shaped body with some beveling along the edges, a bolt on neck capped with a Flying-V headstock, and a satin finish. Targeting the Strat buyer, it had three Bill Lawrence-designed pickups, a master volume and tone, along with a four-position switch. This wasn't a Varitone "tone-sucker" circuit. It put the single-coil pickups in various phase configurations without the typical single-coil hum. The clear pickup covers show what looks like a bar magnet and the copper wiring sealed in an epoxy of some kind. With a three-way toggle switch, there were a lot of sounds, some of which were good, and others, not so useful. The electronics were top-mounted on the pickguard and there were no panels on the back for controls. 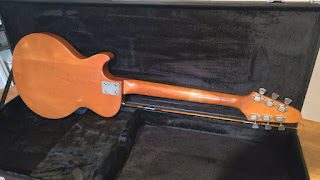 These guitars were heavy, as most guitars in the Seventies were. The guitar had chrome bell-shaped tuners and a stud tailpiece/wide Tune-o-matic bridge, which gave a little more adjustment for intonation. The neck profile of the guitars was kind of odd. They remind me of the later wide-flat feel of some of the Eighties and Nineties guitars, but they had a chunky feel to them. It wasn't a very Gibson-feeling neck at all. The S-1 came with an unbound rosewood or maple fingerboard. If you could get your hands on a maple fingerboard, they were a delight to play. They had a thin lacquered or poly finish on them, with low/wide frets. You could get the action down to the point where you could "breathe" on the strings to fret a note. I tried one that someone had set up with 12-gauge flatwounds on it and it was probably the fastest-feeling guitar I ever played if you weren't big into bending. With light roundwounds, you had enough space to do some heavy, soulful bending without fretting out.
For finishes, you had a choice of natural, black, a kind of walnut-looking color, and a weird maroon or burgundy. You hardly ever see the latter. The headstock is finished with the usual black lacquer on the front with the gold Gibson logo and a truss rod cover with "Marauder" carved into it.

The unique thing about the electronics was that it offered a lot of very non-Gibson-y sounds. You could get a decent Telecaster twang out of it and a snappy Strat tone, but because of the feel of the neck and the density of the woods used (maple, maple, and more maple), it felt kind of compressed. One of the settings was a sound that would be fantastic for funk. As a matter of fact, I think the Brothers Johnson endorsed them or had one on an album cover at the time. Just strum some sixteenth notes on a thirteenth chord and you were in funk heaven.

The model shown here has darkened with age and has a pleasing patina to the finish. The exemplar shown here comes with a non-original hardshell case, currently on auction for just over $1900. Compared to what a Les Paul from this era could cost you, it's a steal. You get some interesting tone options and a distinctive-feeling guitar for a reasonable price for a vintage instrument.