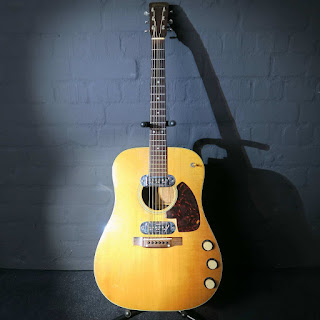 When I got out of the Air Force in the mid-1990s, I wanted to get as far away from any military kind of business as I could. I ended up managing a small music store that sold guitars, pianos, school band instruments, sheet music, and accessories. One of the sheet music items that we absolutely could not keep in stock was the book (with tabs) of Nirvana's "Unplugged" album. All my young guitar students wanted to learn the songs from it.

Well, EBay has the exact model that Kurt Cobain played on that album and tour. It's not the actual guitar--the actual guitar sold on auction for something like six million dollars! But for a fraction of that cost (a mere $67,000) you can have one just like it. 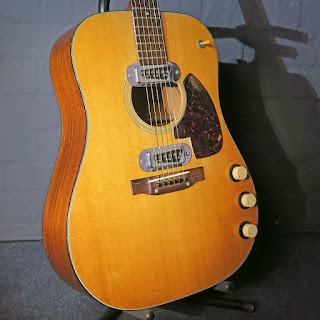 The guitar is a 1959 Martin D-18 with two factory-installed DeArmond pickups, Kluson tuners, mahogany back and sides, Sitka spruce top, and a TKL hard case. The control knobs are laid out in an odd order. Closest to the soundhole, where you'd expect the volume for the neck pickup to be is the tone control for the neck pickup. The middle is the overall volume control and the one by the bridge is the tone for the bridge pickup. There's a pickup selector in the upper bout by the neck.

It seems to me that such a setup ought to feed back like crazy when you turn up the volume the least little bit. Definitely not anything you want to use on a stage with hot monitors. If you're a Kurt Cobain fan, maybe this is your cup of tea. If you have almost $70,000 laying around and you don't have anything useful to do with it, you can buy a guitar LIKE the one Kurt used. If that's the case, you can also send me a small windfall. Leave your email in the comments and I'll send you my PayPal address!