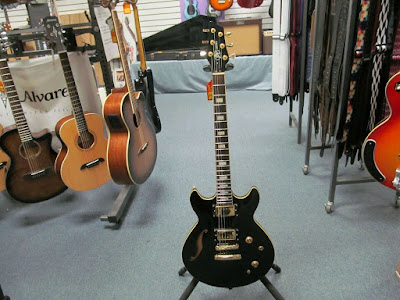 Back in the 1990s, JB Player came out with some innovative guitar concepts. Yes, you have probably seen their Stratocaster copies with the Floyd Rose tremolos as were the fashion of the time. Some of them had those awful "crackle" paint jobs that were also in style. Yuck. They made acoustic and electric guitars, some of which were pretty unique, usually in the $300-$600 price range. They were marketed by Musicorp in the United States.

OK, it's now education time about how music stores operate. If you were the owner or manager of a music instrument retail store, you'd have your hands full trying to stock all the items for every different kind of instrument you'd sell. I used to run a small store in the Nineties and, believe me, it is a challenge. You have to keep stocked up with pianos, guitars, basses, violins, mandolins, banjos, amps, pedals, strings, plus horns, woodwinds, drums, heads, cases, reeds, straps, picks, capos, stands, sheet music, instruction books, and all kinds of accessories. If you had to contact the companies for all of these things, you'd never get off the phone placing orders. So there are businesses that are called "one-stops." They are wholesalers who buy from all the various manufacturers and then publish a catalog for the lines they represent and then sell to retailers. So with "one-stop," you can make a call and place an order for whatever you need. Musicorp was one of those one-stops and they were the vendor in the United States for JB Player guitars. 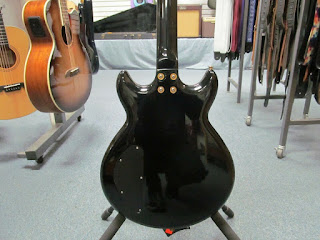 The model presented here is a pretty rare one. I don't think they made many of these. The guitar is a semi-hollow design like a Gibson 335, but smaller. It had a chambered body with F-holes and, uniquely, a bolt-on neck. The back of the guitar is what makes this one memorable. Instead of having the back glued to sides, the back is routed from one piece of wood, chambered, and then glued to the arched top. Thus it is contoured on the back edges next to the body. The smaller width of the body and the contours make this guitar feel extremely comfortable to hold. The hardware is all gold, including Gibson-style tuners, Tune-o-matic style bridge, and the pickup covers. Cream binding looked classy. Electronically, the guitar is very straightforward with two pickups, a selector switch, and one master volume and tone control. 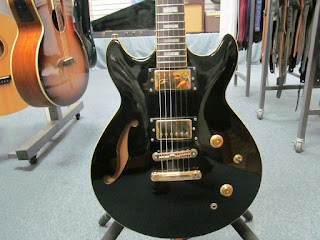 Sonically, this was a fairly interesting guitar. The neck had a wide-flat design, as was common on the shred machines of the day. The bolt-on neck allowed higher-order harmonics to sing through better than with a glued-in neck. The guitar felt almost luxurious to play because of the contoured back, wide fingerboard, and slim neck depth. It sounded great with jazzy and funk tones, but it was feedback resistant enough to crank it for some loud blues. It came in two finishes, a sunburst and the tuxedo black.

You don't hardly see any of these. Either JBP didn't make a lot of them or they didn't sell a lot of them in the US. The price on these new sold for around $650, so that put them into a price range where they had to compete with the lower-end Fenders and upper-end Epiphones. Given that guitarists are, more often than we like to admit, snobs over name brands, we like to be able to have that name recognition in our instruments. Not a lot of people ever heard of JB Player. Today, the company markets only low-end guitars for beginners. Few people today know that JBP Artist lines (both acoustic and electric) were good quality and very innovative.

If you're in the market for something different and affordable, you can find one of these rare birds on EBay currently for under $500.