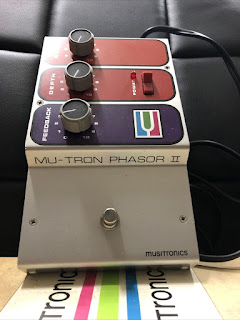 One of the signature sounds of the 1970s was the phase shifter. Musitronics made the Mu-tron Phase II in the mid- to late-1970s. Phase shifters were intended to sound something akin to the rotating Leslie speakers that organists used, which create a Doppler effect of sorts. The additional controls of depth, feedback, and speed allowed a wider variety of tones, some of which were quite extreme.

The Mu-tron Phase II came in a brushed metal casing that was surprisingly heavy and robust. A lit rocker switch informed you if the pedal was on or off, and it could act like a mute switch to turn off the signal chain when you were taking a break. The effect was AC powered, so you had to provide an outlet for it. At least you never had to worry about a 9V battery dying in the middle of a gig.

The Mu-tron was a bit more expensive and it seemed to have a more high-fidelity sound than the popular MXR phase shifter of the time. It had more stages in the phase process and a wider frequency range. It came a cross somewhat cleaner, but that wasn't always what players were looking for. The MXR was also smaller and took up less room on a pedalboard. Nevertheless, the Mu-tron had great tone. Plug your guitar in and twist a couple of knobs and you'd be tempted to launch into the Doobie Brothers' "Long Train Running." On the most extreme settings, you'd find yourself out there in "deep space" with some very luscious, syrupy tones. I had one of these when I played with my first band back in the mid-Seventies. It cost around $125 at the time, which seemed like a lot for a pedal. I used to run a Maestro Fuzztain in front of it and, together, they could create a heavy sound like that of Frank Marino of Mahogany Rush. Black Sabbath sounded amazing with it, too.

These pedals have become fairly collectible. They are rugged and the example shown here is in primo shape, including the original box. Going for $500 today. Lesson to be learned? Hold on to every piece of gear you have. You never know what will become collectible!