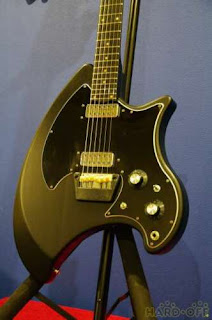 Ovation made a big splash in the 1970s with their round-back acoustic-electric guitars. They also produced a line of solidbody electric guitars named Deacon and Breadwinner. These guitars were oddballs in almost every way, but they were an extraordinarily high quality instrument, if you could figure out how to use it.

Let's start with the body, which the line's most identifiable feature. The asymmetrical design was driven by ergonomics primarily. If you play a Les Paul seated for any length of time, you know how it likes to slide off your lap. The Breadwinner/Deacon body shape allowed you to hold the guitar comfortably in two seated positions. You could play it on your right leg or you could balance it comfortably on your left leg, the way a classical guitarist might hold a guitar. The strap buttons were placed where the guitar balanced nicely for playing while standing. The long "fin" on the upper side of the guitar gave you a comfortable place to rest your picking arm, like a Gibson 335.

The body was made from mahogany and was substantial in weight. The Deacon was the premium guitar in the line and it had a glossy-finish that highlighted the wood finish. The finishes included a natural mahogany, a dark sunburst, and a reddish-hued one. The Breadwinner models were covered with a textured, synthetic finish reminiscent of the Lyrachord bowls of the acoustic Ovation guitars. The finishes were very durable and came in finishes that included black, white, tan, and blue. The upper bouts of the body were allowed to provide full access to the highest positions on the neck with ease. Both the Breadwinner and Deacon models had a pickguard for the mounted controls and a brass plate in the back that covered the battery compartment for the active electronics. 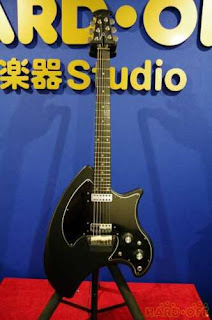 The bolt-on neck on the guitar is one of its best features. The 24-fret neck was multiple ply mahogany that would resist warping and twisting. Not many guitars were made in the Seventies that had 24-fret necks. Ovation had a unique truss rod system that included a bar as well as the rod and the necks were rock-solid. The necks felt wider than Fender or Gibson necks and had a flatter profile with really amazing fret-finishing. The fingerboards were high-quality polished ebony, so slick and smooth you'd think you were playing on a composite. These were fast necks! The Deacon models had diamond-shaped abalone inlays and the Breadwinners had the standard pearl dot markers. The nut was a nylon/synthetic material and the signature Ovation headstock hosted Schaller tuners, which provided smooth, accurate tuning.

The Ovation bridge was also very unique. It rocked on two mount points that could be used to adjust the height. The bridge saddles were adjustable for intonation and sat in a brass tray surrounded by a synthetic black housing. Earlier models had plastic saddles; later ones had brass saddles for enhanced sustain.

The electronics on this guitar were surprisingly innovative and, unfortunately, ahead of their time. The guitar featured two pickups, two switches, and two oven-like knobs for volume and tone. It is amazing the number of tones you could coax from so few controls. At the heart of the system was an active pre-amplifier that operated on two nine-volt batteries. The pre-amp activated when you plugged in the guitar. With daily use, the batteries lasted about a year. The pickups on early models were a wide single-coil system and the later ones had a humbucking configuration. The guitar was exceptionally good at rejecting noise and interference. 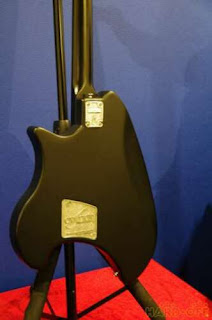 The pre-amp solved a lot of problems that most guitarists simply take for granted. Every electric guitarist knows that the tapers on the potentiometers used for volume controls are not linear. In other words, turning up from 1 to 3 yields only a slight change, but from 8 to 10, volume jumps rapidly. There is also interaction of the tone controls. Roll back the tone control and you simply roll off high frequencies. You don't really boost the bass frequencies. Ovation's pre-amp made for a completely different response. From 1 to 10 on the volume control was a smooth, linear curve. The tone control was active. The "neutral position," where 10 would be on a standard tone control, was in the middle of the knob's travel, at 5. If you turned up toward 10, the pre-amp actually boosted treble and actively rolled off bass frequencies. If you rolled it back toward 1, the pre-amp cut treble frequencies and actively boosted the bass frequencies.  This is what threw off many guitarists. The sounds could be so extreme at either end that you could end up with tones that were atypical, almost unusable.

The two switches were also rather odd. Almost universally, three-way pickup selectors are ordered, neck only, both pickups, and bridge pickup only. Ovation's switching system was different. The first position was neck only, the second was bridge only, and the third position was both pickups out-of-phase. For this reason, the guitar could get sounds that didn't sound like any other guitar, but it also could closely approximate most Les Paul and Stratocaster sounds in one guitar. The sound that you couldn't get was one that was a deal-breaker for many players. You couldn't get the classic two-pickup tone of the middle position of a Gibson or a Telecaster. Back in the day, Fender hadn't begun selling Strats with five-way switches. Guitarists had to carefully position the switch for the in-between sound of what we now use as position 2 and 4 on a Strat. The other switch was a two-way switch that functioned as a notch filter. It cut resonance from the pickups and gave them a really glassy sound that was super clean. One thing that most people don't know about the active electronics is that the battery compartment contained a screw you could turn to adjust the output balance between treble and bass pickups.

The Deacon and Breadwinner were guitars that loved effects. The pre-amplifier sent a powerful signal down the cable to a pedalboard and rhe active tone controls interacted with effects, enhancing the effects. For example, the extreme clean sound going to a fuzz pedal made it very articulate. Time shifting effects like phase shifting or chorus really sparkled.

There are several Breadwinners on eBay right now. They have become collectible and their value has appreciated. In the Seventies, a new Breadwinner would set you back $495 and another $99 for the molded case. The Deacon models were about $200 more expensive because of their premium finishes, inlays, and gold hardware. Unfortunately many of these were carved up, had their pickups replaced, and pre-amps removed over the years. If you can find one that is still stock, it'll go for over $2000 at the time of this writing.