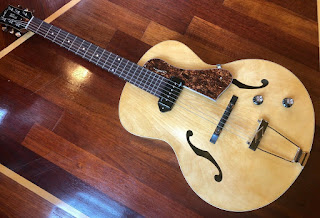 Archtops are an acquired taste. Many acoustic players try them out an think, "Yuck!" because there is a seeming lack of resonance, sustain, and low end. Young electric players try them and crank them up where they get nothing but feedback. These players are unfamiliar with the music and role the archtop guitar was designed to play, namely that of a tuned percussion instrument in a swing band.

The archtop guitar was designed to project a very narrow range of frequencies, but project them well in a precise way. If you listen to old swing recordings from the Forties, you'll hear the archtop player playing chunky quarter notes in time with the high hat. It's almost like the high hat and the guitar blend to create the rhythm for dancing. In those days, jazz was dance music. It wasn't until the invention of the 33 1/3rd RPM long-play disc that jazz became something un-danceable. Archtops have a pronounced midrange spike that doesn't necessarily sound nice on its own as a solo instrument. The sound can seem rather brittle. That's why famed archtop players like Freddy Green developed a unique style of using three-not chords that favored the tones that outlined the harmony, which could be moved in a linear way creating melodies and countermelodies, without having to play endless barre chords. 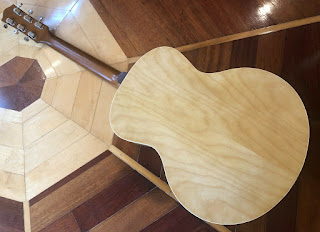 When archtops began to sport pickups, the guitarists could step out and solo with volume rivaling that of saxes and trumpets, and the tone began to change. The tone became darker, with less snap. Players played with a smoother string attack. Yet in the rhythm context, the acoustic tone of the guitar was an important part of the jazz orchestra.

The Godin 5th Avenue represents this early era well with a guitar that is fresh, but pays homage to the guitars of the era. It has been constructed to have a little more low end than the average vintage archtop, as a compromise with modern acoustic players, but it still has plenty of snap. The model here has a very nice natural finish, but it also comes in a "Cognac Burst" as well. The top, back, and sides are Canadian cherry, a "sustainable" wood as opposed to maple or spruce. Flip the guitar over and you can see the darker mahogany neck contrasting against the lighter-colored finish of the back. That'a nice touch. The tortoiseshell pickguard fits the vibe nicely and the tailpiece and bridge are beautifully understated as well. 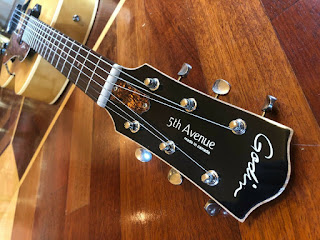 The headstock is attractive and the tuners the usual 14-1 sealed gear kind. The fingerboard is rosewood and unbound to match the understated look of the guitar. The fingerboard radius is 16 inches and the scale length is a very comfortable 24.84 inches. Frets are beautifully finished, dressed, and leveled. Put a set of D'Addario Chromes on it and the feeling is supple and luxurious.One P-90 pickup is mounted to the top near the neck where it delivers a clear, almost acoustic tone with some decent snap and clarity. A volume and tone control are mounted to the lower bout. Even better, put some La Bella black tapewound strings on it and the acoustic quality will really pop.

The Godin is not as ornate as many archtops in this price range, but its tone is superior to many even at a more expensive price point. It feels like a guitar that has been "played in" and very comfortable. The finish gives it this feel, like it was hand rubbed with French polish instead of glossy polyurethane. If you're looking to get a first archtop, and you don't want to break the bank, a Godin 5th Avenue might be just the thing you're looking for.