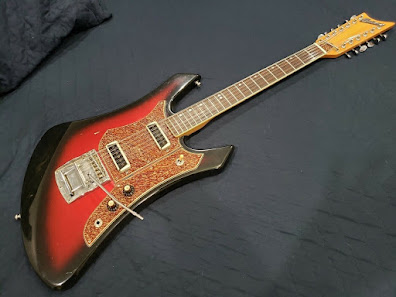 Japan was famous for two things in the 1960s: Godzilla movies and crazy-shaped guitars. The object of our attention today is a 1967 Univox "Mystery" 12-string. A prime example of the mutant guitars that came from the Matsumoka guitar factory of the day, the guitar has an extreme body shape, like something from a sci-fi movie. Ash was the typical wood used for the bodies of Matsumoka guitars and maple for the neck. The rosewood fingerboard is topped with 21 frets and has "left justified" pearl-dot position markers. The elongated, assymetrical headstock is not angled, which necessitates a retainer bar just above the nut to act as a string guide and provide proper downbearing angle onto the nut. Tuners are the six-to-a-plate, worm-gear variety that are fairly reliable, but they can deteriorate with age.
The electronics include two pickups, neck and bridge, a three-way selector switch, and controls for volume and tone. The pickups remind me of the ones you'd find in the Epiphone ET-270 models played by Kurt Cobain.
The guitar's most unusual feature is a tremolo bar--on a 12-string! It should be called the "string-popper," because any up-trem movement of a 12-string tuned to concert pitch is going to pop the high octave on the G string--guaranteed. It's hard enough to keep a 12-string in tune without a whammy bar! Of course, nobody in the 1960s was dive-bombing. That wouldn't come along until Kahler locking trems appeared in the Eighties. This was for that gentle surf-guitar warble that required a delicate touch. Even then, I can't imagine the G octave surviving more than a couple of warbles.
If you are a Godzilla fan, you might also have a love for the stringed variety of Japanese nuclear mutants like this Univox.