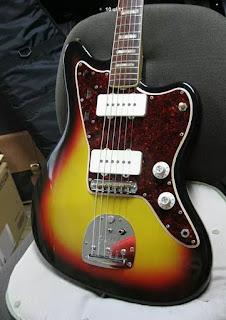 In 1958, Fender introduced the Jazzmaster to its line in an attempt to attract legit jazz guitarists. The intended clientele proved to be far more conservative than expected, but the surf music wave of the early 60s loved the Jazzmaster. The guitar features a number of unique features, most especially a two-channel circuit for the pickups. A switch on the upper horn allowed the player to isolate just the front pickup and adjust the volume and tone separate from the main channel, which had a standard volume and tone control and a three-way toggle switch.

The Jazzmaster pickups were a quasi-soapbar shape, single coils, which had a darker tone than Teles and Strats. The bridge tone is thick and defined while the neck pickup could get dark, jazzy tones. One of the unexpected things I discovered about Jazzmaster is that they are a total funk machine. The blend of neck and bridge is perfect for funk!

The instrument’s neck is slim and the offset body makes it feel like the upper registers are really accessible. Usually it had a rosewood board with circular pearl dots in it and it was generally unbound. This model was a deluxe version with block inlays and a bound fingerboard. The radius is very narrow; however, and it’s definitely not for big string bends. In fact, Fender sold these with stock 12s or 13s on them. You can adjust the guitar for lighter strings, but you can encounter some odd problems.

The Jazzmaster had a floating tremolo and a rocking bridge. The bridge rested in two metal “thimbles” embedded in the body balanced upon two screws, held in place by only the tension of the strings. It could rock back and forth when the term was used, but you dared not get too aggressive with it. With light strings, it could slip out of position fairly easily. Another oddball thing about the bridge was that aggressive picking could cause the saddle screws to turn and lower the action while you were playing.

Overall, Jazzmaster were quirky and many of them languished in pawnshops until Kurt Cobain played the model’s cousins, the Jaguars and Mustangs. In the shredding Eighties, you could probably pick it up a Jazzmaster for under $200. Today, they fetch a high price. Our featured guitar is going for around $8100 today.