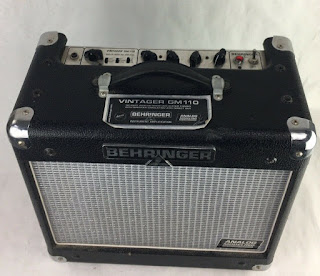 Behringer gets bashed a lot by guitar snobs. Overall they make great gear for guitarists on a budget. In the years I ran a music store, the guys who bought Gibson Les Pauls, PRS, or American Fenders were all doctors, lawyers, engineers, and other professionals. The musicians were the guys who were putting their change together to buy the lead guitarist an E-string for the gig that night. Therefore I am a fan of budget gear. If you can find something inexpensive to do the job, especially if you are a hobbyist or a gigging musician, that's the gear I want you to know about.

One of those piece of gear is the Behringer V-Tone GM 110 combo amp. Essentially what Behringer did is clone a much more expensive amp made by Tech 21. The amp features analog modeling that helps you get the characteristic sounds of other amps in a little practice combo amp. I used to keep one of these in my lesson studio at a community recreation center and one in my home studio. Back in the day, you could buy them new from Musician's Friend for $59. At that price, I didn't care if anyone messed with it at the rec center when I wasn't around. It saved me from having to lug an amp in there every day I taught lessons. I wouldn't have wanted to leave my nice amp sitting around unattended.

The controls on the amp are ingenious. You hae a drive knob, master volume, and a low, mid, and high EQ knobs. Very straightforward. No memory presets. There are three, three position slider switches with detents for each position. Switch 1 gives you choices of "Tweed, British, and California," which nicely approximates Fender, Fox, and Mesa Boogie. Switch 2 gives you gain settings of Clean, Hi-Gain, and Hot. Switch 3 gives you cabinet characteristics of Flat, UK, and US.

Between the nine positions of the switches you get 27 options. (Is that right? It has been a long time since I took a math class!) None of this requires any menus to scroll through. Just click a switch, twist a knob, and you've got lots of usable sounds. The amp's output is 30 watts, just enough for a practice room or lesson studio, and a 10-inch Jensen speaker. The only thing it lacks is reverb, but that would raise the price substantially. The back panel had a line in-line out for effects, a headphone jack, and an XLR jack to go to a recording console or straight to a mixing board.

The amp didn't have enough "oomph" to hang with a loud band's drummer, but if you were sitting in at a small club jamming with some friends, it could hold its own. The speaker was a bit underpowered for these situations if you played too loud, but that's not what this amp was designed for. If you wanted to get the sound of a Fender Tweed or a Marshall into your home recording console, this excelled at the task.

Because these amps were cheap, they got abused. They were often a newbie's first amp and they took a beating. Their build quality was pretty good. The cabinet was fairly heavy wood and it was covered with decent-quality tolex. The handle was pretty cheap, but it was functional. Many of them are probably sitting in the attic or the garage at mom and dad's house abandoned by players who either didn't stick with guitar or went on to bigger and better gear. These are getting hard to find. If you find one, they're not $59 anymore. The price is going up on them--still reasonable--but still gaining in value.